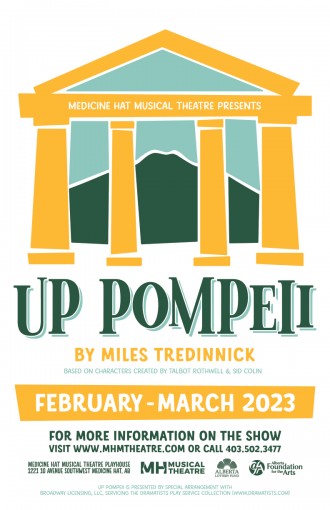 In the courtyard garden of Ludicrus Sextus’s opulent villa, Lurcio (pronounced Lurk-eo) the slave is attempting to give his Prologue to the audience. He is interrupted by his master and mistress, Ludicrus and Ammonia, who have informed Lurcio that he, Ludicrus, is off to the Senate in Rome to propose that there is “far too much sex going on and I’m not having any of it”. His wife is off to visit her mother in law with their daughter, Erotica. The truth, however, is that Ludicrus is actually staying home to have a dalliance with the “well known nymphomaniac and beauty” Suspenda, his neighbour. He wants Lurcio to arrange for them to meet. Meanwhile, Ludricus’s virginal son, Nausius, enters to tell Lurcio he is in love with a slave girl he saw on a slave ship and wants to confess his undying love to her in an ode. Said slave girl, Voluptua, escapes from the slave ship and seeks refuge from Lurcio in the Villa. Things get really complicated when no one can remember which woman is in which room, whom she is supposed to be meeting with, and Ammonia comes home early! Add in a gruff Slave Trader and his side kick looking for their runaway slave, a crazy soothsayer calling for doomsday, and Mount Vesuvius threatening to blow, you have the makings of a hilarious British Farce.